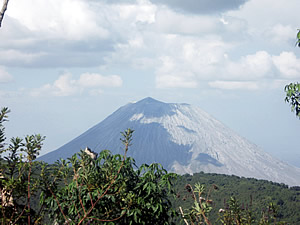 Lake Natron is a soda lake at the base of the active Ol Donyo Lengai volcano and the area around Lake Natron is often described as having a desolate and almost lunar beauty. Walks around the lake and to the streams and waterfalls along the nearby escarpment makes a fantastic adventure off the beaten track. Lake Natron, in Africa’s Great Rift Valley, practically sends a warning with its color. This bright red lake is the world’s most caustic body of water, but not to everything. An endemic species of fish, the alkaline tilapia, lives along the edges of the hot spring inlets, and the lake actually derives its color from salt-loving microorganisms that thrive in its alkaline waters. Spirulina, blue – green algae with red pigments, passes its pigments along to the Lesser Flamingoes that feed on the alga and raise their young here.

If Lake Natron, in Africa’s Great Rift Valley had a color theme, it would be pink. The alkali salt crust on the surface of the lake is often colored red or pink by the salt-loving microorganisms that live there. And the lake is the only breeding area for the 2.5 million Lesser Flamingoes that live in the valley. 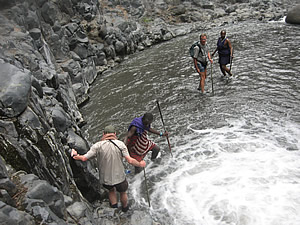 These flamingoes flock along saline lakes in the region, where they feed on Spirulina (blue – green algae). Lake Natron is the only breeding location for Lesser Flamingoes because its caustic environment is a barrier against predators trying to reach their nests. The temperatures in the mud can reach 50 degrees Celsius (122 degrees Fahrenheit), and depending on recent rainfall, the alkalinity can reach a pH of 9 to 10.5 (almost as alkaline as straight ammonia). Even more amazing than the ability of the flamingoes to live in these conditions, is the fact that an endemic species of fish, the alkaline tilapia thrives in the waters at the edges of the hot spring inlets. Because of the unique biodiversity, Tanzania named the Lake Natron Basin to the Ramsar List of Wetlands of International Importance on 4 July 2001.